Christ Church Guwahati founded 1844, consecrated 1850 by Rt Rev Daniel Wilson, bishop of Calcutta
First building collapsed during the earthquake of 1856; rebuilt by 1861
Second building collapsed during the earthquake of 1897; rebuilt by 1901
Renovation 1978
renovated building dedicated by Rt Rev DD Pradhan, bishop of Assam 26 March 1978.
There are many old marriage records of british expatriates dating back nearly 100yrs. There used to be huge horse stables nearby,britishers used to go to Shillong on horse backs,camping along the way..THERE WERE NO ROADS..safe journey prayers used to be in this church. 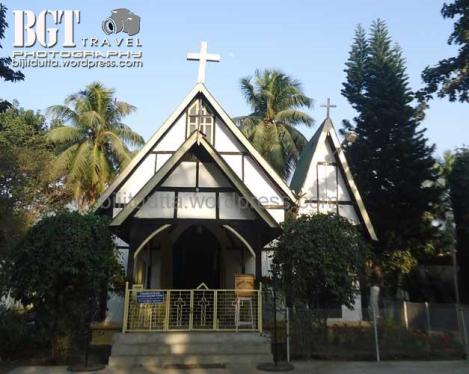 Constructed in 1844, Christ Church witnessed two powerful earthquakes that ravaged the region in 1854 and 1897. The present structure was built in 1901. However, it is now moving towards destruction as termites are feasting on the teak pillars that hold the structure and the cracks that were caused by the earthquake in September 2011 have only added to the damage.